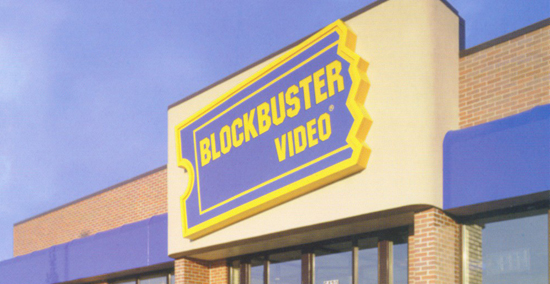 Video stores of every kind have faced serious difficulty over the past few years as Netflix has become the de facto movie rental outlet. The Blockbuster chain has been closing stores at a steady clip, and is likely to continue doing so for the next few years. But a new regulatory filing released this week suggests the end of the chains existence as a big brick and mortar outlet could come sooner, rather than later.

THR reports that Blockbusters filing announces the potential closure of 960 stores, which is about 20% of the remaining 4,400. The closings would take place over the next twelve months. But the brand isnt likely to go away. Redbox, with those $1/day DVD rental kiosks you see in grocery stores, is providing the new competitive rental model. Blockbuster only has about 500 kiosks right now, but claims it plans ten thousand by this time next year. Thats a serious explosion, but given the once-powerful companys stature within the DVD rental market, likely an achievable goal.

I have to admit Im of two minds about the store closings and potential end of the chain as a walk-in outlet. Thats a lot of jobs to lose, and any video store is a breeding ground for people who love movies. As video stores everywhere go out of business, we lose one more method film fans have of connecting to one another and sharing the thing we all love. On the other hand, this is Blockbuster, the company that created its own censored edits of films and that wielded an unhealthy amount of power over film distribution by refusing to carry some films with content that didnt fit a family-friendly profile. (But not all of them; you couldnt get the theatrical cut of Dead Alive, but you could get an unrated Red Shoe Diaries softcore flick.) My gut instinct before thinking about the loss of jobs is good riddance to Blockbuster, but I know its not that simple.

Archived: Blockbuster May Close 20 Locations – Is The Chains Future Kiosk Only? - archived