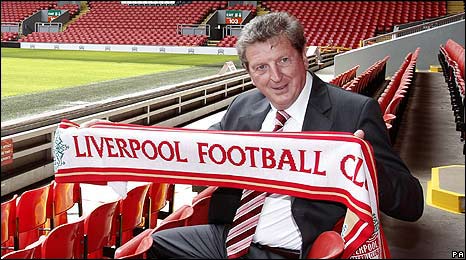 Well the speculation can now be lifted, Roy Hodgson has been named as the new manager of Liverpool Football Club.

The former Fulham boss who guided his previous team to the finals of the Europa League said his first priority is sorting out the futures of Gerrard, Torres and Mascherano.

Hodgson told the club’s website “This is the biggest job in club football and I’m honoured to be taking on Britain’s most successful football club. I’d like to think I’ve earned this job, my career shows that kudos is not something I’ve actively sought but this job carries that with it, and enormous responsibility, and I’m ready to take it on.”

Was this a good move for Liverpool? I admire what Roy has done at Fulham, he has moulded that team and took them to the finals of the Europa league, but Liverpool is a different kettle of fish altogether. There is much more pressure on him to deliver results, especially after the abysmal season they suffered in the last term.

I don’t think Hodgson has it in him to be successful here. What Liverpool want more than anyone is a domestic league title and I don’t think they have the players for that. The team is too inconsistant without Gerrard and Torres and I firmly believe that Torres has lost it. Unless he makes a big money move this summer I really think he’ll have another bad season and be worthless next.

It should also be noted that Hodgson has a get-out free clause in his contract if he is offered the England job – a role I believe much more befitting for him.